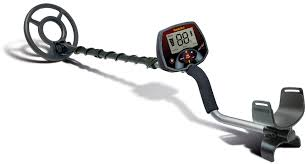 
The Teknetics Eurotek Pro metal detector is an entry level metal detector that comes full with features that are normally only available on much more expensive metal detectors.  Upon taking the machine from its box and assembling it using the easy to understand instruction book, you can tell that this is a well built machine. It has a very sturdy feel to it and all the parts fit together perfectly.


The Teknetics Eurotek Pro is trying to break through into an already very well established beginner end of the hobby, it has a lot of work to do if its to make its mark against the Garretts and Fisher machines.


One nice touch that you will notice is the cover that slides over the headphone socket when its not in use. a simple thing but one I have not seen on a machine before and it will defiantly help by stopping mud and dirt getting in the headphone jack.


When you turn the Teknetics Eurotek Pro metal detector on the lcd screen springs to life with a beep. It is easy to navigate having only 5 buttons to control it, on/off, menu, pinpoint and plus and minus.


By clicking on the menu button we can enter into the setup of the metal detector, first off is the sensitivity which I usually keep in the set standard of 7 although it can be increased to 10 or decreased to 1 depending where to are metal detecting. The next setting is the discrimination setting which I generally leave alone because this metal detector has an amazing feature which I will get onto now.


The third menu option is volume, by increasing or decreasing the volume from levels 1-9 it will will obviously be quieter or louder in your headphones or the speaker. however the Teknetics Eurotek Pro has a really cool feature. If you turn the volume to level 10 it acts as an iron volume control, by doing this you are running in all metal mode so you will be running the metal detector at its maximum depth whilst the machine will be total silent on detection of iron. I have never seen this feature on a metal detector in this price range and was blown away with how effective it is.


Another point to note about the Teknetics Eurotek Pro is its lightening fast recovery time. If the metal detector runs over iron and there is another object nearby it will still detect the good object lying beside the iron as it recovers really quick from the first iron signal.


All in all The Teknetics Eurotek Pro metal detector is a great bit of kit. It performs amazingly and in my mind is just as good if not better than the other entry level metal detectors in its class. I personally own one of these metal detectors and would not part with it as its a simple to use and effective treasure hunter.


The retail price on this detector with the standard 8 inch spider coil is around £180, great value for money


The Teknetics Eurotek pro absolutely rocks, I used to own a Minelab Etrac but due to unforeseen circumstances I had to sell up an give up metal detecting for a while. After a while I decided to get back into the hobby but could no longer afford to buy a hight end detector. So after a lot of deliberating I opted to buy the Eurotek, I wasn't disappointed. Ok, I will not lie its no where near as deep as the etrac but it doesn't even cost 1/5th of what the etrac cost me. I really have nothing bad to say about it. If you decide to buy one you wont be disappointed, but make sure you buy the pro as the standard one does not have the iron audio feature which is worth its weight in gold . happy hunting.